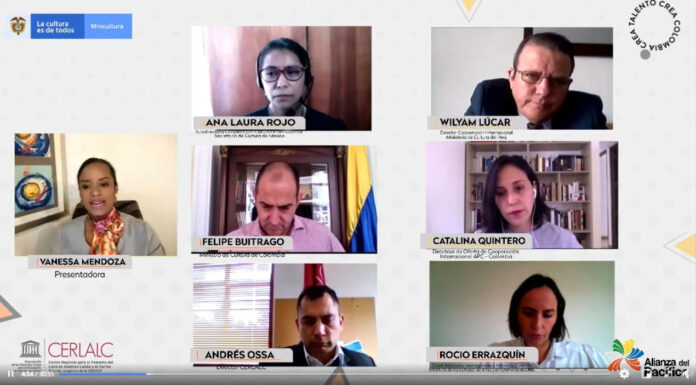 April 28, 2021 – The announcement of the financial contribution of USD 278. 329, to boost the implementation of the work plan of the Technical Group of Culture, during the 2021 term, was made by the director of International Cooperation Offer of APC-Colombia, Catalina Quintero, during the virtual conversation ‘Strategic Alliance for the strengthening of culture in the Pacific Alliance’, held this April 27 and with the participation of the Minister of Culture of Colombia, Felipe Buitrago; the director of the Regional Center for the Promotion of Books in Latin America and the Caribbean (Cerlac), Andrés Ossa and representatives from Chile, Mexico and Peru.

“We consider that the actions foreseen within this Strategic Alliance, such as the digital calendar on the cultural offer in the countries of the Pacific Alliance, the training activities for human resources in charge of cultural and creative affairs, among others, contribute significantly to the economic reactivation of one of the sectors most affected by the pandemic caused by Covid-19, such as the culture sector”, said the director of International Cooperation Offer of APC-Colombia, Catalina Quintero.

The contribution of the Government of Colombia is made within the framework of the country’s pro tempore presidency of the Pacific Alliance and the Coordination of the Technical Group of Culture, led by MinCultura.

“The work plan that the Technical Group of Culture has outlined for the period 2021, is an ambitious plan that seeks, on the one hand, to continue strengthening the creative and cultural industries in the region and on the other hand, to support the reactivation of cultural agents that were affected by the health crisis,” said the Colombian Minister of Culture.

In this way, the Technical Group of Culture prioritized three main lines of action: promoting the circulation and generation of networks and monetary and non-monetary exchanges of cultural goods and services; promoting capacity building, the exchange of experiences and knowledge and the qualification of occupations of independent cultural agents; and continuing to strengthen the publishing sector and, gradually, the performing arts, music and the audiovisual sector.

“With the implementation of this work plan, we seek to consolidate a more integrated, connected and entrepreneurial Alliance, with the objective of contributing to the achievement of Vision 2030,” highlighted Minister Buitrago.

For his part, Andrés Felipe Ossa, director of the Regional Center for the Promotion of Books in Latin America and the Caribbean (Cerlalc), which will be a central ally in the agenda projected by the Pacific Alliance in 2021, said: “Cerlalc firmly believes that this strategic alliance will allow to fully meet the objectives shared by the actors involved, especially in the economic reactivation of member countries, through the transfer of knowledge and the increase of human capital resulting from this alliance. An economy that recognizes the value of creativity and ideas is fundamental for the challenges we face in the 21st century.

“We would like to thank APC-Colombia and the Ministry of Culture, which have come to develop a great work. We also express our enthusiasm for this announcement and the participation of the Pacific Alliance in prioritizing the publishing sector,” said Ana Laura Rojo, deputy director of International Cultural Cooperation of the Mexican Ministry of Culture.

The work agenda of MinCultura and APC-Colombia, also has among its central objectives the consolidation of the International School of the Orange Economy, with the aim of sharing with other Latin American partners, the Ibero-American region, and other parts of the world, the best practices and public policies implemented by the country, around the creative economy.

The Pacific Alliance commemorated its 10th Anniversary with a Presidential Panel

Household cleaning products within the Pacific Alliance will circulate under the...

Virtual Meeting of Women Entrepreneurs of the Pacific Alliance

10 years of a more connected and integrated Alliance with the...

Colombia announces contribution of USD 278,329 for the reactivation of the...

More than 180 promotional activities, six candidates for Associate State and...

VIII version of LAB4+: Entrepreneurship and Innovation Meeting of the Pacific...

With Declaration on Gender Equality and the Digital Market of the...

Council of Ministers of the Pacific Alliance meets in preparation for...