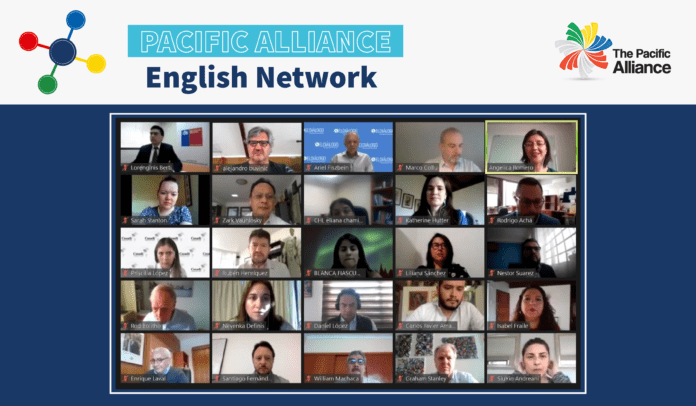 September 24th, 2020. The meeting of the Pacific Alliance English Network (RIAP, by its acronym in Spanish) was held virtually on September 23rd and 24th, organized by the Technical Group on Education (GTE, by its acronym in Spanish) of the PA, with the collaboration of the Chilean office of the British Council and the Inter-American Dialogue Program.

At the opening of the event, the Director General (S) for Multilateral Economic Affairs of the Undersecretariat for International Economic Relations of Chile (SUBREI) and National Coordinator of the PA, Angélica Romero, underlined the importance of this meeting and of “generating the inputs that allow the construction of a strategy to improve the study of English, contributing to optimize the link with the productive sector and facilitating labor mobility, also contributing to improve the commercial and economic opportunities of our regional bloc”.

The meeting consisted of two workshops: one focused on the challenges faced by Chile, Colombia, Mexico and Peru, countries that make up the PA, in terms of public policies for the English language at the school and higher levels; and another workshop regarding the challenges identified to develop a cooperation strategy in this area.

The first one was led by Ariel Fiszbein and Sarah Stanton of the Inter-American Dialogue. And the second was attended by Rod Bolitho, an expert from the United Kingdom in teaching English, who also gave a master class on the first day, focusing on the international experiences of other nations and making a situational comparison with the Member States of the Pacific Alliance.

“The purpose of this meeting was to make the formation of RIAP official, to begin building the cooperation strategy and to hold a meeting with the English-speaking Observer States,” explained Enrique Laval, Head of the International Relations Office of the Chilean Ministry of Education.

For Katherine Hutter, Director of the British Council in Chile, “the meeting allowed us to define a roadmap to improve English in the countries of the Alliance, as a key element for their development, with inputs and sustained support over time from the observer states, including the United Kingdom”.

Regarding the Technical Group on Education, this activity was highly valued since “it allowed us to advance in a joint strategy of cooperation, as a PA and with observer states, to face the challenges imposed by the teaching of English in our countries,” said Maria Amelia Trigoso, coordinator of the GTE.