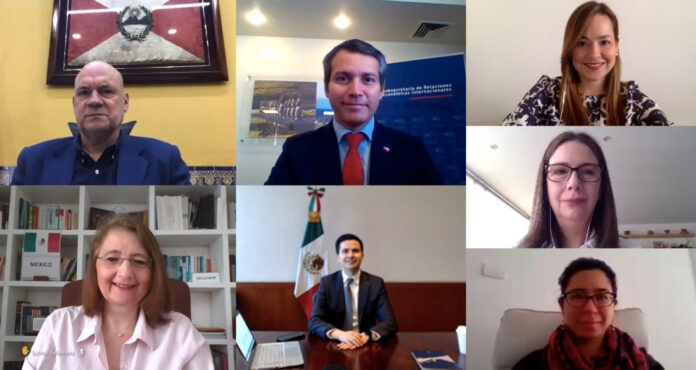 Cooperation projects are expected to be launched in the areas of education, labour, tourism, SMEs, gender, among others, with resources from the Pacific Alliance Cooperation Fund, support from the IDB and cooperation from the European Union.

July 9th, 2020. The virtual meeting of the High Level Group (GAN, by its acronym in Spanish) of the Pacific Alliance (PA), made up of the Vice-Ministers of Foreign Affairs and Foreign Trade of Chile, Colombia, Mexico and Peru, was recently held.

The authorities reviewed the progress of the Work Plan to address COVID-19, which they approved last April, and which included measures in 14 priority areas such as market access, productive linkages, trade facilitation, support to our SMEs, tourism, e-commerce, among others.

The GAN also evaluated the projects submitted to the Cooperation Fund of the mechanism, whose resources will be used to alleviate the economic and social effects of the coronavirus in the countries of the PA.

For the time being, the GAN approved four projects presented by the Technical Groups of the mechanism:

In addition, the GAN agreed to continue working jointly with the Inter-American Development Bank (IDB) and the Development Bank of Latin America (CAF) to develop other projects in the Work Plan to deal with COVID-19. Among the proposed projects, the following stand out: the Virtual Macro-round of Tourism of the Pacific Alliance 2020; the Policy Report on Reconciliation of Work and Family Life, and its impact on women entrepreneurs in the post-COVID-19 context; and the creation of web platforms on the digital economy.

On the occasion, the authorities highlighted the success of other actions promoted by the Technical Groups and Committees of the mechanism, such as the Covid Challenge, which was carried out with the support of the IDB, and for which 396 initiatives with innovative solutions to alleviate the pandemic were presented. The eight winning projects, two from each Pacific Alliance country, will receive seed money and advice from PA experts. Regarding trade facilitation, the online procedures for receiving certificates of origin and health certificates in digital form were highlighted; this has undoubtedly supported exporters during this period.

In terms of Trade Promotion, the adequacy of business macro-rounds in a digital way was analyzed, highlighting the success of the first e-round carried out with the United Kingdom, which achieved concrete business for US$1.5 million and expectations for US$17 million for the 50 exporters of the four countries. The next macro-rounds will be: Intra-Alliance and Central America, Europe and Asia-Oceania.