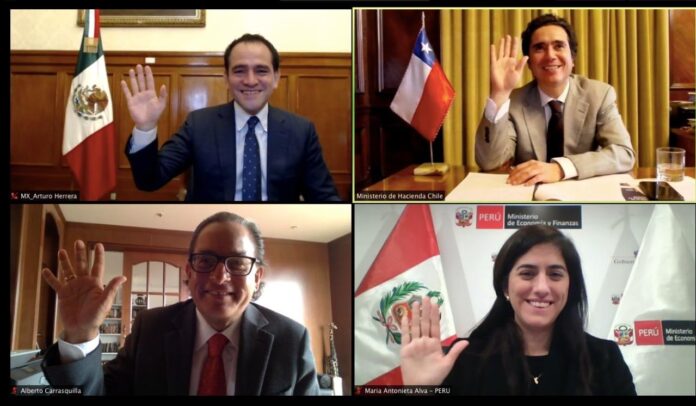 Santiago, Chile (August 28, 2020) – The Finance Ministers of the Pacific Alliance met virtually in order to analyze the substantive challenges arising from the COVID-19 pandemic, as well as to review the progress made by the working groups of the Council of Finance Ministers, in fulfilling the presidential mandates established in the Lima Declaration.

During the meeting, the ministers exchanged experiences on the financial and economic measures taken to contain the emergency, as well as strategies for the early recovery of investment, job creation, and greater dynamism in economic activity.

Likewise, considering the magnitude of the pandemic in the region, they highlighted the relevance of the Pacific Alliance as a platform for the effective consolidation of economic and financial integration between the four countries, as well as to articulate international cooperation efforts.

The Ministers agreed on the importance of adapting fiscal and financial measures in order to continue supporting businesses and households, particularly those belonging to the most vulnerable groups, taking into account that this stage has been characterized by a period of confinement longer than expected and with negative effects on the economic growth of the bloc.

Additionally, they highlighted the importance of maintaining and strengthening international cooperation mechanisms in the face of current challenges. On the other hand, they reiterated their commitment to continue supporting the flow of financing to the productive sectors, with special emphasis on SMEs; the promotion of public investment in infrastructure, as a lever for economic recovery; the strengthening and integration of capital markets, to make them stronger and more resilient to future shocks; and the implementation of pro-employment policies.

For their part, the Ministers welcomed the progress made in recent months on Financial Integration and Tax Treatment, through the exchange of experiences and regulatory frameworks among the four countries, as well as the implementation of capacity-building activities. Similarly, considering the preponderant role that the digitalization of the economy plays in the current context, they agreed on the creation of the Cybersecurity Working Subgroup, which will generate a space for discussion to reduce the risk of occurrence and mitigate the impact of threats derived from cyber attacks to the financial sector.

Finally, the Ministers thanked the working groups for their efforts to achieve concrete results in this context, and reiterated the need to continue working on outstanding deliverables for the upcoming Pacific Alliance Summit.