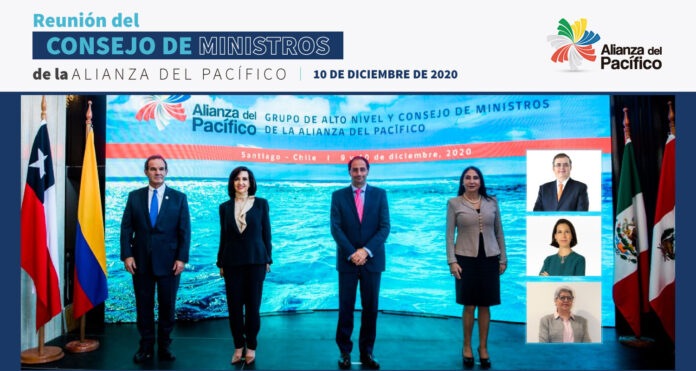 During the meeting, the ministers adopted the Roadmap to implement the Presidential Declaration on Sustainable Management of Plastics.

December 10, 2020 – The last meeting of the Council of Ministers of the Pacific Alliance, composed of the Ministers of Foreign Affairs and Foreign Trade of Chile, Colombia, Mexico and Peru, was held in a semi-presential format, in preparation for the XV Summit of Heads of State to be held this Friday, December 11, at the Palacio de la Moneda.

Minister of Foreign Affairs Andres Allamand highlighted that “we are pleased to present the year and a half of the pro tempore presidency of the Pacific Alliance with great achievements, despite the contingencies we have faced with the global health crisis. Among these, the strategy to have a regional digital market, the insertion of women in the economy, the development of a more sustainable common space and a joint work plan that seeks to mitigate the adverse effects of the health crisis stand out. In addition, with an improvement in management according to the times we are living that brings benefits to our citizens”.

During the session, the Council of Ministers adopted the Roadmap towards a Sustainable Management of Plastics, which aims to implement the Presidential Declaration signed at the XIV Lima Summit, where it is agreed to work in eight areas of action: Regulation, good practices and public policies; Innovation, research and business transformation; Plastic waste management and recycling; Circular economy; Financing; Education, information and citizen transformation; Commerce; and International cooperation.

The Council also received the report on the work developed by the High Level Group (GAN, by its acronym in Spanish), highlighting the Declarations and roadmaps that will be signed at the Summit of Presidents regarding the Regional Digital Market and Gender Equality. The authorities also addressed the report on the Additional Protocol, the decisions adopted by the Free Trade Commission and Regulatory Annexes, among other matters.

During the meeting, information was also given on the holding of the II Cooperation Forum PA, where representatives of Chile, Colombia, Mexico and Peru met with 226 delegates from 49 countries, representatives of the Observer States of the PA, the European Union, the Eurasian Economic Community (EEC) and ASEAN. Among the most important areas for exploring possible joint cooperation projects are global value chains, education, gender, environment, digital agenda, disaster management and artificial intelligence, among others.

The ministers also approved the Work Plan of the Cooperation Fund for 2021 for one million dollars, the same amount executed in 2020, and which benefited projects related to the support of citizens in the face of the coronavirus pandemic. The plan for next year, which will be focused on reducing social and educational gaps and moving towards economic reactivation, includes: a Youth Volunteer Program of the Pacific Alliance; workshops for the Management of Psychosocial Factors and Promotion of Mental Health at Work; and a Workshop for the formulation of the Disaster Risk Management Project.