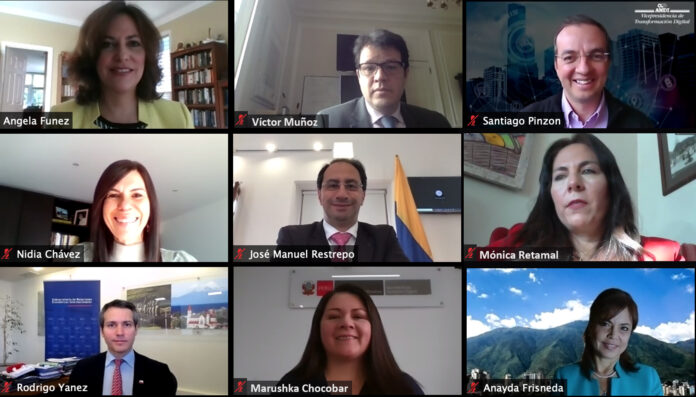 With a series of public-private dialogues, which will take place this year, the regional mechanism advances in the construction of a Road Map for the Creation of Digital Talent.

July 22, 2020 – Today the Webinar “Public-private actions to accelerate the creation of Digital Talent in the Pacific Alliance” was held, the first session of a series of public-private dialogues promoted by the Pacific Alliance (PA), with the support of the IDB and the Center for the Fourth Industrial Revolution of Colombia, in order to build a Road Map for the creation of Digital Talent for the mechanism.

This first session was attended by the Minister of Trade, Industry and Tourism of Colombia, José Manuel Restrepo, and the Undersecretary of International Economic Relations of Chile, Rodrigo Yáñez. Authorities who stressed that the PA countries must be prepared to take on the challenges and opportunities represented by the Fourth Industrial Revolution (4IR), such as addressing the skills gaps identified by the private sector, which is urgent to ensure a higher rate of employability and adapt to the demands of the work of the future, thus improving the productivity and competitiveness of the economies.

Minister José Manuel Restrepo pointed out that “today more than ever where leadership is needed, these spaces become indispensable and the Pacific Alliance is the best scenario to do it. Especially when the focus is on human talent, its challenges and its transformation into this new better normality”.

In his speech, Undersecretary Rodrigo Yáñez highlighted that the final objective of these dialogues, in addition to making the needs and priorities of the private sector visible, is the preparation of a Digital Talent Road Map for the Pacific Alliance, which “can include specific public policy actions and business initiatives aimed at the creation, acceleration and sustainability of digital talent in our countries. Addressing these challenges is essential to the future recovery of our economies,” he said.

In the course of the seminar, Anayda Frisneda, Microsoft Corporate Manager, who made a presentation on Digital Competencies, stressed that “a road map is very important, it involves joining efforts. We have to talk about an articulated plan between government, private sector, civil society and trained institutions”.

A public-private dialogue was also held, moderated by Santiago Pinzón, Vice President of Digital Transformation of the ANDI, Colombia, with the participation of Víctor Muñoz, Presidential Advisor for Economic Affairs and Digital Transformation, Colombia; Mónica Retamal, President of the Kodea Foundation, member of the Digital Talent Program, Chile; Marushka Chocobar Reyes, Secretary of Digital Government of the Presidency of the Council of Ministers, Peru; and Nidia Chávez, Director of Fundación Telefónica, Mexico.

Among the topics discussed were the diagnosis, lessons learned, and what is being done to build digital talent in the region, as well as how this process can be accelerated in the face of post-pandemic economic recovery.

As a complement to this activity, in the afternoon a Workshop was held to advance in the construction of the road map, where officials from the four countries, accompanied by experts from the Center for the Fourth Industrial Revolution and the IDB, delved into issues such as the level of gap existing in the region, the key elements to accelerate the creation of digital talent, the identification of short-term actions that the State should prioritize for the generation of digital talent in the countries of the Pacific Alliance, among others.

The Digital Programs chapter of the study on Transversal Skills in LAC in the 21st Century, points out:

According to the 2018 survey on Skill Gaps in Latin America:

Based on a study conducted by the IDB on the competence and skills of the 4IR in AR, BR, ME, CH and CO: