AP/ 21st of July of 2021. The Pacific Alliance (PA) and Singapore have concluded negotiations of the Pacific Alliance-Singapore Free Trade Agreement (PASFTA). This was welcomed by the Ministers of Trade of Colombia Ms. Maria Ximena Lombana, of Peru Ms. Claudia Cornejo, of Mexico Ms. Tatiana Clouthier and Mr. Andres Allamand the Minister of Foreign Relations of Chile as members of the PA and Mr. Gan Kim Yong Minister for Trade and Industry of Singapore via a videoconference on July 21st.

Maria Ximena Lombana, Minister of Trade, Industry and Tourism for Colombia, in her capacity of Pro Tempore President of the PA announced the closing of negotiations of the PASFTA and highlighted the strengthen of our commercial partnership ties with Singapore.

“This FTA marked a milestone for the PA as the biggest step in our integration with the Asia Pacific Region which allow us to grant Singapore the status as the first Associated State to the PA. In 2017, the Pacific Alliance launched negotiations with Singapore, Australia, New Zealand and Canada, which are Candidates to be Associated States to develop instruments for economic and commercial integration, stressing our commitment to effectively insert ourselves in the Asia Pacific Region.”

“With this new Agreement between Singapore and the Pacific Alliance we are fulfilling this vision path improving the commercial relationship, attracting investments, expanding market access of goods, and boosting access for service suppliers in a wide range of sectors. Reaching Singapore’s market allows using regional inputs from different countries enhancing productive regional chains. We expect to attract Singaporean investors to the Pacific Alliance’s extended market as a productive and export platform to the region.”

“The Alliance perceives that being an Associated State is as mechanism that promotes free trade agreements and provides windows of opportunities for cooperation. This instrument will enable to explore areas for collaboration on technology and digital economy that may include the linking of SG’s national Single Window with the PA’s, port management and logistics, infrastructure and urban solutions, energy collaboration and food trade. Additionally, Singapore suggested the Digital Economy Partnership Agreement (DEPA) as other initiative which we may explore with the PA states, recognizing that it may bring tangible benefits for all the countries involved.”

“The Pacific Alliance is in alignment with Singapore’s idea on free trade agreements, which will bring growth and ensure long-term sustainable economic development, and will also boost our commercial and economic relationship.”

“The PASFTA represents the shared commitment by the Pacific Alliance and Singapore to persevere with greater economic integration and support the rules based multilateral trading system. It sends a powerful message to the global community that our countries remain open for business, and despite the pressures placed on economic multilateralism, we want to reach out to one another and create more opportunities for our people. We want to build on this foundation, grow our links even more, and generate opportunities for our people and businesses.”

“We agree with the Pacific Alliance that the Associated Status provides a platform for collaboration in various areas such as energy collaboration, food trade, digital economy, infrastructure and urban solutions, port management and logistics, and the linking of National Single Windows.”

The Pacific Alliance comprises of Chile, Colombia, Mexico and Peru. Collectively, it has a combined population of 230 million, a per capita GDP of 19 thousand US dollars and exports that reach 627 US billion dollars, making the Alliance the 8th largest exporter in the world. In 2019, Singapore’s total trade in goods with the Pacific Alliance was S$6.1 billion, which accounted for 33.2% of our total trade in goods with Latin America.

The PA is also positioned us as the 8th largest economy, attracting 56 million tourists, representing 41% of Latin America and the Caribbean GDP and accounting for 38% of its foreign direct investment. Additionally, both, the World Competitiveness Centre and the Doing Business rank our countries as the most competitive in the region.

Singapore became an Observer State to the Pacific Alliance in 2014, and a Candidate Associated State in 2017. This event complies with mandate from the presidential statement of the PA´s Presidents and the Prime Minister of Singapore at Santiago’s Summit last December. 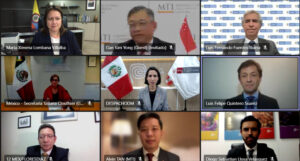