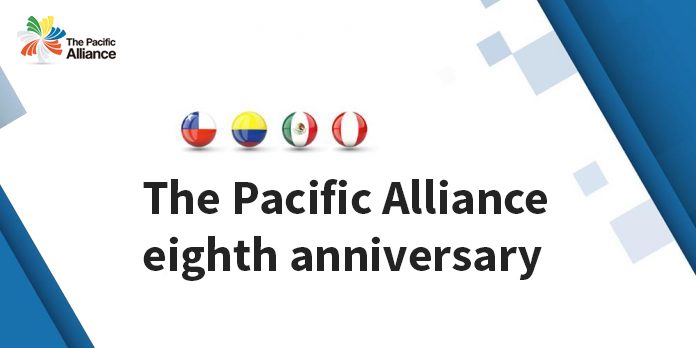 Today, April 28th, the eighth anniversary of the Pacific Alliance, recognized worldwide as one of the region’s most successful integration mechanisms, is celebrated. Peru, Chile, Colombia and Mexico commemorate this important event, carrying out various activities simultaneously.

In Peru, the country that holds the Pro Tempore Presidency, the flags of the four countries and the Pacific Alliance were hoisted at the Government Palace. Also, the projection of the colors, logo and informative video of this important mechanism of integration in the Magic Water Circuit at the Parque de la Reserva (Park of the Reserve) is planned to be performed this Sunday, April 28th at night.

It is also worth mentioning the implementation in Lima, on April 23rd and 24th, of the I Technical Forum of Cooperation of the Pacific Alliance with its Observer States, in whose framework, the first portfolio of projects was announced; the IX Session of the Inter-parliamentary Committee for follow-up to the Pacific Alliance, at the Congress of the Republic, on the 24th and 25th of this month; and the launch of the Public Policy Index for Micro, Small and Medium-sized Enterprises in Latin America and the Caribbean (IPPALC, by its acronym in Spanish), on April 25th and 26th. Finally, on April 26th, a Film Series was inaugurated at the Inca Garcilaso Cultural Center, with the participation of the Embassies of Chile, Colombia and Mexico in Peru.

In the case of Chile, the eight years of creation of this regional integration effort, the most transcendental carried out in Latin America in the last decades will be commemorated with the raising of the flags of Chile, Colombia, Mexico, Peru and the Pacific Alliance at the La Moneda Palace, presidential seat of the Chilean Government since 1922, as well as with the dissemination of various cases of citizens who have benefited from the achievements of this area of deep integration.

In Colombia, the Chat Show “Pacific Alliance: from expectation to reality” was held on April 24th. This talk was accompanied by a gastronomic demonstration entitled “Flavors of the Alliance”. Also, between April 22th and 28th, the San Carlos Palace, headquarters of the Foreign Ministry, wore the flags of the four countries. To conclude, on May 30th, a seminar will be held in Bogota aimed at Colombian entrepreneurs, where the main advances and opportunities in trade, investment and tourism will be presented; organized by ProColombia.

For its part, the Government of Mexico will name a park in Mexico City as “Parque Alianza del Pacífico”. The inauguration will take place within the framework of the XXI Meeting of the Council of Ministers of the Alliance, which will be held on May 10th in the capital of the country. The park is a symbol of the deep integration between Chile, Colombia, Mexico and Peru. Its purpose is also to make the Alliance “more citizen-friendly” according to the 2030 Strategic Vision.

The Pacific Alliance is a mechanism of deep integration that was created on April 28th, 2011, with the signing of the Lima Declaration. It is projected to the world with emphasis in the Asia-Pacific region, promoting greater growth, development and competitiveness, through the free movement of goods, services, capital and people. The 2030 Strategic Vision projects the Pacific Alliance as the main commercial integration platform in Latin America and reinforces its actions as a more integrated, more global, more connected and more citizen-oriented mechanism.