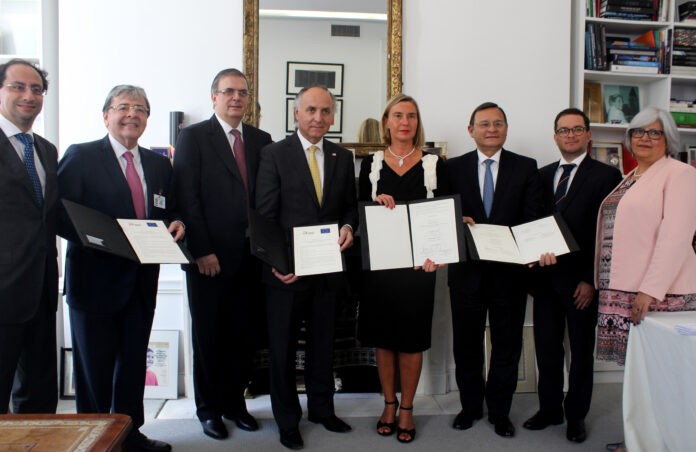 Today, in New York City, the High Representative of the European Union for Foreign Affairs and Security Policy/Vice-President of the European Commission Federica Mogherini and the Council of Ministers of the Pacific Alliance composed of Chile, Colombia, Mexico and Peru, signed a Joint Declaration, in which they agreed to deepen the partnership between the two regional blocs.

High Representative Mogherini said at the occasion: “The European Union is committed to strengthening its political, economic and cooperation ties with the Pacific Alliance. The Alliance is a driver of regional integration in Latin America, with whom we have a solid friendship and we share fundamental values, a strong belief in multilateralism and a joint commitment in promoting the 2030 Agenda and its Sustainable Development Goals”.

Mr Teodoro Ribera Neumann, Foreign Minister of Chile, the country who currently holds the Presidency Pro Tempore of the Pacific Alliance, stated: “The instrument we subscribe today will allow us to strengthen these bonds of friendship and solidarity, and at the same time consolidate the economic relationship and cooperation we have, as Pacific Alliance, with the European Union.”

The Joint Declaration signed today provides a framework to strengthen cooperation and dialogue between the European Union and the Pacific Alliance for the coming years. It identifies multiple areas of common interest, where there is clear potential to deepen cooperation. Such areas include regional economic and financial integration, digital strategies, the fight against climate change and the promotion of green growth, the facilitation of the movement of persons, as well as innovation, science and technology.

The European Union and the Pacific Alliance have been working for many years to strengthen their relationship and accomplish its objective of achieving the free movement of people, goods, services and capitals. In that sense, both parties have committed to promote these objectives in areas as such as trade and investment, financial integration, SMEs, digital economy innovation, science and technology.

In the margins of the EU-CELAC Foreign Ministers Meeting in Brussels in July 2018, hosted by High Representative Mogherini with Foreign Ministers of the Pacific Alliance and European Union Member States, both sides agreed to identify specific areas of dialogue, cooperation and mutually beneficial activities. The Joint Declaration is the result of this commitment and will guide the work towards a deeper and strengthened EU-Pacific Alliance partnership.