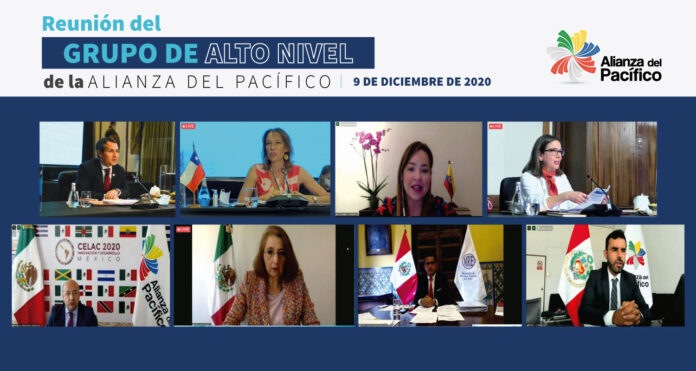 December 9, 2020. Today was the last meeting of the High Level Group (GAN, by its acronym in Spanish) of the Pacific Alliance, prior to the Presidential Summit to be held on Friday, December 11, at the Palacio de La Moneda, where Chile will transfer the pro tempore presidency to Colombia.

The meeting was held in a semi-presential format with the participation of the Vice Ministers of Foreign Affairs and Foreign Trade of Chile and Colombia, Mexico and Peru.

During the session, the GAN reviewed the Declarations and roadmaps that will be signed at the Summit of Presidents regarding the Regional Digital Market, Gender Equality and also the roadmap on Sustainable Management of Plastics, which will be signed by the ministers on Thursday. Likewise, the authorities of the bloc addressed the status of the situation and the Work Plan of the Cooperation Fund 2021, the distribution of the coordination of the technical groups for 2021, the report on the Additional Protocol, the decisions adopted by the Free Trade Commission and Regulatory Annexes, among other matters.

The Undersecretary of International Economic Relations, Rodrigo Yáñez, highlighted that in the context of the pandemic caused by the COVID-19 “The Pacific Alliance has reinforced its objectives, taking a leap into digital through the launch of the Regional Digital Market, in addition to reinforcing its commitment to the incorporation of women in/into trade and with sustainability, essential elements to advance towards a sustainable economic recovery of the region”.

Chile assumed the pro tempore presidency of the Pacific Alliance on July 6, 2019 at the Summit of Presidents in Lima, Peru, and due to the pandemic, the members decided to extend it exceptionally until December 2020. Since March, all meetings of technical groups, committees, national coordinators and the High Level Group have been carried out virtually, which add up to about 500 to date.