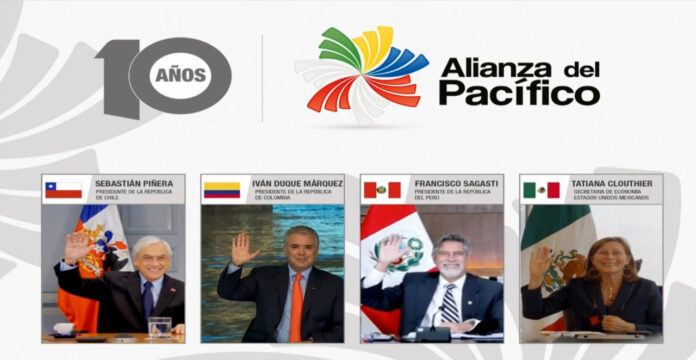 The event began with welcoming remarks by President Iván Duque, who in his capacity as president pro tempore referred to the progress made in strengthening intra-regional trade, investment diversification, structural steps in environmental matters such as the agreement for the protection of the oceans, the elimination of tourism and business visas facilitating the mobility of people and the instruments for digital transformation. “Today we have set the roadmap for the Digital Market within the Pacific Alliance,” the President emphasized.

The President of Chile, Sebastián Piñera, told how the idea of the Alliance was born and stressed that seeking integration not only inward but also outward is what has allowed it to be so successful. He also pointed out the tasks ahead in this new decade: to increase intra-regional trade and make rules of origin more flexible, accelerate the incorporation of the associated States, advance in the convergence with Mercosur, in the incorporation of women and SMEs and promote the digital economy and the technological revolution, especially in the post-pandemic scenario. “I call on the Pacific Alliance, along with celebrating its first 10 years, to make a firm resolution that the next 10 years will be better,” said the Chilean President.

The President of Peru, Francisco Sagasti, also referred to the openness, breadth, pragmatism and operability as qualities of the Pacific Alliance and focused his speech on the challenges of the next decade based on the 2030 vision: the promotion of science, technology and innovation, the use of technology not only in terms of the digital economy but also related to the environment, the empowerment of women, the closing of gender gaps and the strengthening of the relationship with ASEAN, APEC and our traditional partners in Latin America, Europe and North America. “We must consolidate the positioning of the PA as the main platform for multidimensional integration in Latin America,” said Sagasti.

The Secretary of Economy of Mexico, Tatiana Clouthier, pointed out that regional integration is a priority tool to face common challenges and that solidarity multilateralism is fundamental to move forward in the current crisis scenario resulting from Covid-19. In addition, she spoke about the issues on which the work of the PA has focused and on which work must be prioritized in the next decade, such as the implementation of a Regional Digital Market, the empowerment of women, the promotion of innovation and entrepreneurship, the reactivation of tourism, youth employability, among others. “We have the conviction that these actions will allow us to have more integrated, more global, more connected societies and, above all, closer to the needs of citizens,” said the Secretary of Economy.

After the intervention of the representatives of each country, each one answered the questions posed by the moderator Andrea Bernal, related to the importance of the Pacific Alliance in the economic reactivation in the current situation, the main assets and challenges of the mechanism, intra-regional trade integration, incentives for entrepreneurship, the associated States, the incorporation of environmental and circular economy issues, the initiatives in terms of employability and job training, and the advantages of working with other economic blocs such as ASEAN and APEC.

The event was also attended by the Minister of Foreign Affairs of Colombia, Claudia Blum, and the Minister of Trade, Industry and Tourism, José Manuel Restrepo, who referred to the achievements of the Alliance over the past 10 years and ratified their commitment to continue working for a more integrated, more connected, more citizen-oriented and more global Alliance.

The Pacific Alliance commemorated its 10th Anniversary with a Presidential Panel

Household cleaning products within the Pacific Alliance will circulate under the...

Virtual Meeting of Women Entrepreneurs of the Pacific Alliance

10 years of a more connected and integrated Alliance with the...

Colombia announces contribution of USD 278,329 for the reactivation of the...

More than 180 promotional activities, six candidates for Associate State and...

VIII version of LAB4+: Entrepreneurship and Innovation Meeting of the Pacific...

With Declaration on Gender Equality and the Digital Market of the...

Council of Ministers of the Pacific Alliance meets in preparation for...