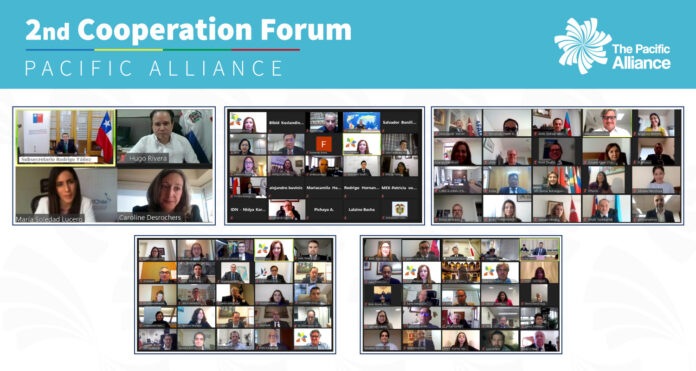 The Forum, which was intended to consolidate the relationship with the observer states of the mechanism, with which it has been working jointly for several years, was divided into five chapters: the Americas; the EEC, Eurasia, the Middle East and Africa; the European Union and its members; East Asia and Oceania; and ASEAN, and it was developed entirely virtually.

“We are very pleased with the outcome of the Second Forum, as it has been demonstrated that our integration block today more than ever interacts vividly with its Observer States. We hope to be able to implement each of the projects, ideas and ambitions presented. From the Pacific Alliance we maintain our commitment to our citizens to push for solutions, and to work actively with our partners for economic reactivation,” said Rodrigo Yáñez, Undersecretary of International Economic Relations of the Ministry of Foreign Affairs of Chile, the country that holds the pro tempore presidency of the Pacific Alliance.

The first session with the countries of the Americas was held on November 10, with the participation of 68 representatives from 10 observer countries. During this meeting, various proposals emerged, such as that of Canada to share experiences in relation to Global Value Chains, Services and Cultural Industries, in addition to reviewing elements on the Gender approach.

On November 12, in the chapter referring to Europe, Eurasia, Africa, the Middle East and India, 27 representatives from 11 observer states participated, highlighting the offer of cooperation from Switzerland to hold a workshop on Public Procurement, continuing cooperation with the private sector in water management; from Georgia the collaboration in the exchange of ideas on the facilitation of trade in services; while Norway invited to participate in a workshop on Disaster Management.

The third chapter was dedicated to the European Union, on November 17, where 80 delegates from 17 countries of the European bloc spoke with the PA counterparts on possible areas of cooperation. In particular, the European Union offered to deepen the technical work on the Environment, Digital Agenda and Tourism; while Spain expressed its interest in carrying out workshops of interest to the Alliance together with its Spanish centers in Latin America, as well as giving continuity in terms of Education to programs and scholarships; and Slovenia proposed to provide experiences in the field of artificial intelligence, deepening in areas of cybersecurity and digital threats.

At the fourth meeting, on November 19, representatives of the Pacific Alliance met with 21 delegates from Australia, China, South Korea, Japan and New Zealand, where they discussed cooperation interests in the digitization of small and medium-sized enterprises, as well as facilitating access for SMEs to global value chains. In the area of innovation, New Zealand offered to exchange experiences on innovation applied to agriculture.

Finally, on the night of November 24, the final chapter of the II Forum was held with the meeting with countries of Southeast Asian and ASEAN, where 30 delegates participated. One of the most important topics was disaster management, in which Indonesia and Thailand pledged interest in participating in a workshop on the subject in early 2021. Indonesia also expressed its interest in collaborating with the Pacific Alliance on Mobility of People and Post-Pandemic Economic Recovery, as well as working with the PA on the gender gap, sharing good practices for overcoming the problem. the problem.