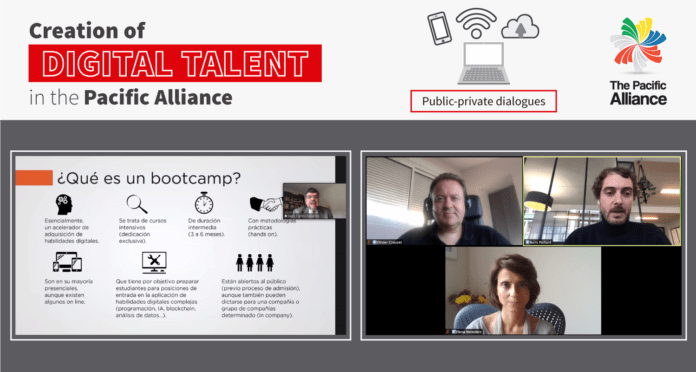 With a series of public-private dialogues, which will take place this year, the regional mechanism advances in the construction of a Roadmap for the Creation of Digital Talent.

September 29th, 2020. The second session of the series of public-private dialogues to accelerate the creation of Digital Talent in the Pacific Alliance took place today. In the session “Bootcamps, Agile Solutions to Accelerate and Transform Talent”, different experts examined the case of bootcamps as a tool to create digital talent, and which have emerged as a response to the context, galvanizing an alternative path to traditional education.

In this second session, the leading specialist of the Inter-American Development Bank (IDB), Juan Carlos Navarro, developed the presentation: “The methodology of the Bootcamps”, where he highlighted the importance of the innovation that is taking place in the education of workers in the area of programming and other advanced digital skills; the phenomenon of the bootcamps is the best expression of this type of innovation, which are playing a central role around the world in responding to the exponential growth in demand for programmers. Latin America must be proactive so as not to miss this development opportunity.

The panel “How are programming bootcamps adapting in the global context and how can they support the creation of digital talent for economic recovery?” was also developed, with the participation of CEOs and founders of Bootcamps from the European Union, such as Olivier Crouzet, Director of Pedagogy, École 42; Boris Palliard, global CEO and founder of Le Wagon; and Nayib Abdala, Partner and Head of Product Strategy Make It Real Camp, which was moderated by Elena Heredero from the IDB.

The conversation revolved around bootcamps and related approaches as a tool for creating digital talent: what works and what doesn’t?; challenges, opportunities and forms of adaptation that bootcamps are facing in the current context of COVID-19; in addition, experiences and recommendations for countries and entrepreneurs were presented.

The webinar was closed by the Director General for Multilateral Economic Affairs of the Undersecretariat for International Economic Relations of Chile (SUBREI), Angélica Romero, who pointed out that “it is urgent for us to be able to address in an integrated way the reduction of the existing digital gaps in our countries with a view to facing the challenges of the Fourth Industrial Revolution”.

As a complement to this activity, a Workshop was held in the afternoon where officials from the four countries talked with regional entrepreneurs about the local experience of bootcamps in the countries of the Pacific Alliance. In addition, working tables were held to share local experiences, lessons learned, possible new actions, as well as topics such as certification, regulation and financing, among others.