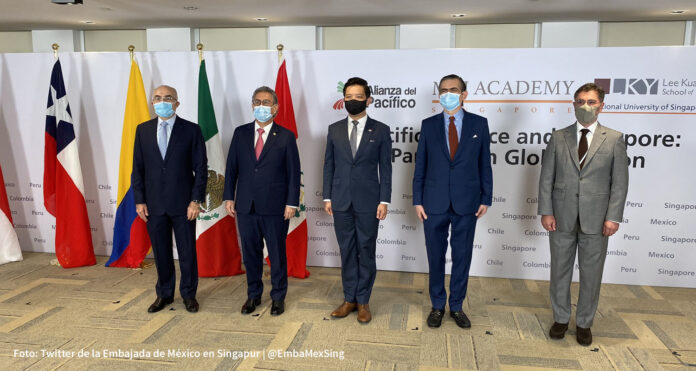 The event was attended by the Minister of State and Minister of Trade and Industry of Singapore, Alvin Tan, who accompanied the ambassadors of Chile, Colombia, Mexico and Peru in Singapore. The event was opened by the Vice Minister of Foreign Trade of Colombia, Laura Valdivieso Jiménez, who in her speech highlighted the 10 years of existence of the Pacific Alliance, spoke of the strengths of this bloc and the progress in the negotiation of a trade agreement with Singapore, a candidate country to be considered as an Associated State of the PA.

Minister Tan for his part recalled that the seminar shows the different interests that can be explored between the four countries and Singapore. He recalled that the PA is a champion of free trade and has achieved important developments in areas such as liberalization for investment, visas, stock market exchange. He said that the PA is connected with Singapore and this makes them partners in globalization. He also invited more Latin American companies to enter Southeast Asia and affirmed that there is a lot of potential between the regions.  He also stated that this trade agreement will be the first Free Trade Agreement (FTA) signed between Singapore and Colombia. In addition, he said that business must be supported by a strong structure and mentioned that for Singapore the agreement will be fundamental in terms of cooperation, infrastructure, innovation and food trade.

In the panel of ambassadors, special emphasis was placed on the benefits for Singapore of being the first Associate State of the Pacific Alliance. Among them, they mentioned the advantage of being the first Associated country with access to the eighth largest economy in the world such as the PA. They also mentioned the possibility of accessing digital economies, the integration of companies and startups, the DEPA agreement that promotes digital trade, rules of origin, value chains, job creation, the promotion of knowledge-intensive goods, maritime and air transport services and investment in a harmonious environment between countries.

Chile spoke of the need for clean energy, emphasizing green hydrogen, and invited other countries to invest. Colombia also spoke about energy and the ease for companies to maintain operations from any country in the alliance. He also referred to the possibility of Singapore developing startup projects and financial support. Mexico referred to the importance of establishing alliances and developing best practices and synergies in cooperation, technology and production chains. Peru, for its part, referred to food security, recalling that although the PA currently produces 13% of the world’s food, by 2029 it is expected to reach 28% with nearly 200,000 hectares covered. He also mentioned superfoods for long and healthy lifestyles, and the need for organized value chains so that products arrive on time and in the expected conditions.

Dr. Francis Chong, senior director of emerging markets at Singapore’s Ministry of Trade and Industry, who was part of the panel, spoke about the importance of medical supplies. Likewise, he emphasized that in this digital era, the physical interaction of people cannot be left aside to generate associations and create channels.

During the closing of the day, Eduardo Pedroza, General Secretary of PECC, participated, who emphasized the PA as a mechanism for dialogue, recalling the termination of PAFSTA, and referred to the importance of meetings like this one, so that the community has knowledge of the advantages of being allies with the PA.